St. John’s folk/rock singer Dave Whitty will be releasing his third studio album: Talkin’ Back Fool on June 10th 2018 at the LSPU Hall. Dave will be backed by St. John’s finest musicians: Peter Green and Jason Howard, Aaron Collis, Mark Manning, Jordan Thorne, Valerie Hewson and Curtis Peckham. Dave will be performing his new record in full along with some old favourites.

Dave Whitty has been a member of the music scene in St. John’s, Newfoundland since age 17. He got his start playing solo sets of original music, recording a couple small demos, and generally trying to learn the craft and flow of how the music community worked. 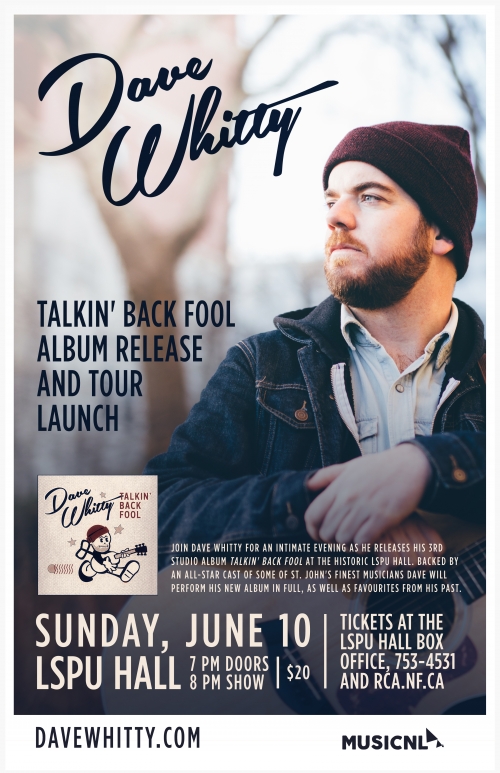 If you listen to Dave’s music, it won’t take long to figure out the hardcore pride he has for his home province and all the good times and beauty it brings. Sticking to his musical roots, Dave writes and sings about actual events and classifies his style as folk/rock with strong lyrics of friendship, love, and tales of growing up. One minute, Dave is making his audience laugh with his genius comedic quality, singing about ridiculous adventures with friends, and the next minute he can conjure profound feelings of nostalgia or pain with his stories of finding love, losing friendship, and the things that make Newfoundland special.